Margaret Atwood: From Self-Publishing to the Literary Stars
This website, whose manager is Bubok Publishing, s.l., uses cookies (small data files that get stored in your browser), your own data and third parties' data as well, for the operation of the site (necessary), analytics (anonymous analysis of your activity on the website) and social media activity (so that you can interact through them). You can read our polÃ­tica de cookies. You can accept, reject, manage or view more information about said cookies by clicking on the corresponding button.
AcceptRejectSettings and further information
Bubok blog â Print online Âŧ General Âŧ Outstanding Âŧ They are already promoting their book Âŧ Margaret Atwood: From Self-Publishing to the Literary Stars

This year The Booker Prize was a true wave of emotions that caused some chaos in juryâs heads. And how couldnât it when women writers are showing what they got and, well, rocking it? You already know that the prize was awarded to âGirl, Woman, Otherâ by Bernardine Evaristo and âThe Testamentsâ by Margaret Atwood after the judges rebelled against the rules. Now letâs take one step at a time and have a closer look at one of these great ladies who are making an impact on todayâs literary landscape: Margaret Atwood. 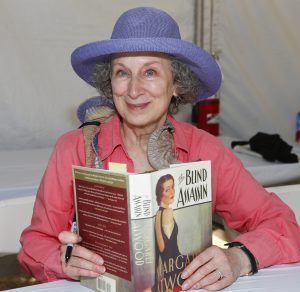 WHAT WAS BEFORE “THE HANDMAID’S TALE”?

For Atwood, the prize comes at a moment of renewed cultural relevance for “The Handmaidâs Tale”. This celebrated book has sold over 8 million copies in English and been adapted into a popular series. At 79, sheâs not only Canada’s most famous living writer but also the prizeâs oldest winner. In addition, she became the fourth author to have won the prize twice. She first won it in 2000 with her historical fiction novel “The Blind Assassin”. How inspiring is that?

Margaret Atwood is the author of 60 books of fiction, poetry and critical essays. She has won numerous honors and awards. These include a Guggenheim Fellowship, a Molson Award, the Ida Nudel Humanitarian Award, and a Canada Short Fiction Award. Her novels include “Cat’s Eye”, shortlisted for the Booker Prize, “Alias Grace”, which won the Giller Prize in Canada and the Premio Mondello in Italy, “Oryx and Crake”, also shortlisted for the Man Booker Prize. The writer also won the Prince of Asturias Prize for Literature in 2008.

This may seem achievable only thanks to the biggest publishing companies that represent many celebrities. However, M. Atwood proves us that the path towards recognition doesnât have to start with prestigious names on your book cover. Of course, probably many heard about this writer only after the dystopian story “The Handmaid’s Tale” hit the screens; this 1985â novel will undoubtedly be the book that established the Margaret Atwood’s name for good. Nonetheless, she earned her place in the literary canon well before Offredâs character existed.

In 1961, when Atwood was in her early 20s, weâd see her first crucial steps towards publishing success. She achieved success with only 16 pages and a mere 7 self-published poems when first entering the elusive literary scene. A 5Ã6Âū inches chapbook “Double Persephone” is her first published work which was awarded the E.J. Pratt Medal in Poetry at the University of Toronto.

At that time theÂ 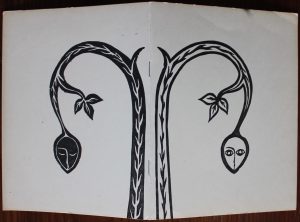 young writer didnât bother with looking for someone to represent her, an unknown author. In fact, she didnât even put any biographical information on the book. However, itâs quite fascinating when you think of it: a literary superstar, whose name has been echoing around the world, started her career with an unsigned work. Now she writes full time and for sure this woman doesnât have to worry about any technical stuff. In contrary, she handset the “Double Persephone” herself with a Flatbed Press, designed the cover with Lino Block and evenÂ assembled the book.

In one of the interviewsÂ Atwood was asked what she would describe as her greatest reward as a writer:Â “The first poem I ever got published was a real high. All the other things that have happened since then were a thrill, but that was the biggest.” These words coming from one of the world’s most famous and prolific authors should confirm that of all the fears aspiring writers have there’s actually nothing to be afraid of. The first work you publish may warm your heart like no other. Sometimes it’s actually the breakthrough point when you overcome your biggest insecurities.

What else can we learn from Atwood? Many things, of course. If we follow her personal story, we know that in order to end up as a best-selling author you donât have to be one at the very beginning of your career. Yes, she succeeded with “Double Persephone” but it hasnât defined her as an author. “The Handmaidâs Tale” did. Want to sell your books in an uncountable number of copies worldwide? Then know that there’s no shame in starting with a 16 pages book priced at $0.50 and having a print-run of only about 220 copies. Itâs still a piece of creative work and it still makes you a first-time-published author. SoÂ at some point because of those books that were being sold for 50c 60 years ago this woman is now a literary superstar.Â Maybe that beginning is not the dream path every aspiring writer would like to step into, but commenting on the start of her career Atwood said, âIt taught me that you could make things, and there are still these entry points that involve a certain amount of self-publication.â

In conclusion, M. Atwood makes one thing clear: with much hard work and an entire heart, a small-scale production can become a starting point towards great achievements. Actually, even better: it can lead to making your writing dreams come true. 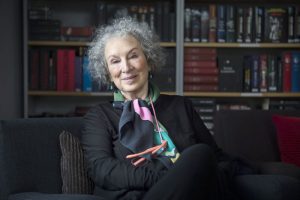 “If I waited for perfection, I would never write a word.”