In this article, we will explore the history and form of the sonnet, offer examples, and suggest writing prompts for creating your own sonnets. Hopefully this may help those feeling a lack of creative inspiration to rediscover the joy of writing. Working in a different format can let your creativity run wild, helping you to feel reinvigorated, and maybe even finish that book you’ve been procrastinating on!

This is the first article in a series exploring various examples of short form writing. Short form writing, particularly ones with rigid structural and formulaic restraints often functions as a fun and useful exercise to escape writer’s block or reading fatigue. The reader knows what to expect and the author has a secure foundation within which to work, freeing up their energy to focus on theme and content. 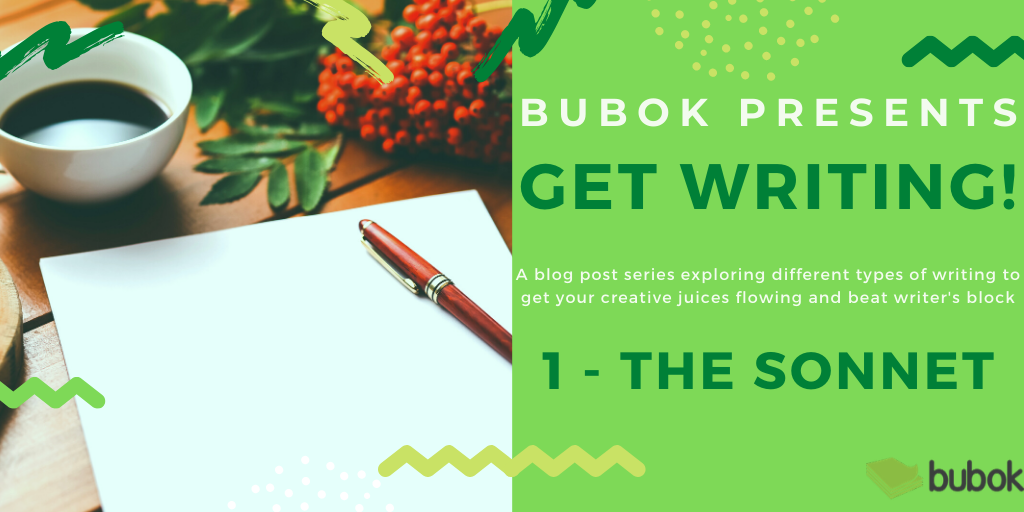 What is a Sonnet?

A sonnet is a short poem that follows a specific format and only has 14 lines. The short form and specific metrical and rhyming scheme of the sonnet can, perhaps counterintuitively, make it easier to formulate than prose or loosely structured free verse. Furthermore, writing within a strict formula can be a great exercise to overcome writer’s block and force yourself to write by working with a different structure than you’re familiar with.

The History of the Sonnet

The sonnet certainly has a long, rich history in European literature, first arising in the court of the Holy Roman Emperor Frederick II in 13th century Sicily. From its home in southern Italy, the sonnet spread throughout Europe, eventually becoming central to English literature.

In English, we tend to write sonnets in iambic pentameter, a metrical pattern that is one of the most natural for poetry the English language. Furthermore, the outsize influence of Shakespeare, who used the metrical structure both in his plays and sonnets, has forever cemented iambic pentameter as central to English literary canon.

There are two dominant rhyme schemes used in English-language sonnets, the Petrarchan (orÂ Italian)Â and Shakespearean (or English). Thomas Wyatt gets the credit for first introducing the sonnet to English literature, via his translation and emulation of Petrarch’s sonnets.

What does Iambic Pentameter mean?

Iambic pentameter is a rhythmical structure that describes a particular pattern of syllable stress and line length found in much English poetry. In English verse, the iamb is a metrical unit that consists of two syllables, the first unstressed, the second stressed (i.e. spoken with more force). An iamb can be conceived of as like the rhythm of a heartbeat “da DUM”. Iambic pentameter is five of these in a row per line, i.e:

For an example, consider the first line of Shakespeare’s Sonnet 12

The Petrarchan sonnet is usually divided into two parts, theÂ octave and theÂ sestet. These two parts usually have different tones or subjects, with the sestet offering a new insight or response to the octave.Â The octave is the first eight lines of the sonnet, and we can sometimes consider it as twoÂ quatrains,Â sections of four lines each. Similarly, the last six lines of a Petrarchan sonnet, theÂ sestet, can be conceptualized of consisting of twoÂ tercets. The octave and sestet also have separate rhyme schemes, with the octave typically having the form ABBAABBA, and the sestet CDCCDC or a slight variation. (The letters A, B, C, and D each represent different rhyming sounds at the end of the respective line of the sonnet to which they refer).

As an example, see below a sonnet in the Petrarchan mode by English poet William Wordsworth:

Nuns Fret Not at Their Convent’s Narrow Room

Nuns fret not at their convent’s narrow room

And hermits are contented with their cells;

And students with their pensive citadels;

Maids at the wheel, the weaver at his loom,

Sit blithe and happy; bees that soar for bloom,

High as the highest Peak of Furness-fells,

Will murmur by the hour in foxglove bells:

In truth the prison, into which we doom

Ourselves, no prison is: and hence for me,

In sundry moods, ’twas pastime to be bound

Within the Sonnet’s scanty plot of ground;

Pleased if some Souls (for such there needs must be)

Who have felt the weight of too much liberty,

Should find brief solace there, as I have found.

The rhyme scheme of the above poem is ABBAABBA CDDCCD (for example room and loom rhyme).

Surely one of the best known sonnets by an American poet is Emma Lazarus’ “The New Colossus”, about the Statue of Liberty. However, note that the sestet here uses follows a rhyme scheme of CDCDCD

Not like the brazen giant of Greek fame,
With conquering limbs astride from land to land;
Here at our sea-washed, sunset gates shall stand
A mighty woman with a torch, whose flame
Is the imprisoned lightning, and her name
Mother of Exiles. From her beacon-hand
Glows world-wide welcome; her mild eyes command
The air-bridged harbor that twin cities frame.

“Keep, ancient lands, your storied pomp!” cries she
With silent lips. “Give me your tired, your poor,
Your huddled masses yearning to breathe free,
The wretched refuse of your teeming shore.
Send these, the homeless, tempest-tost to me,
I lift my lamp beside the golden door! 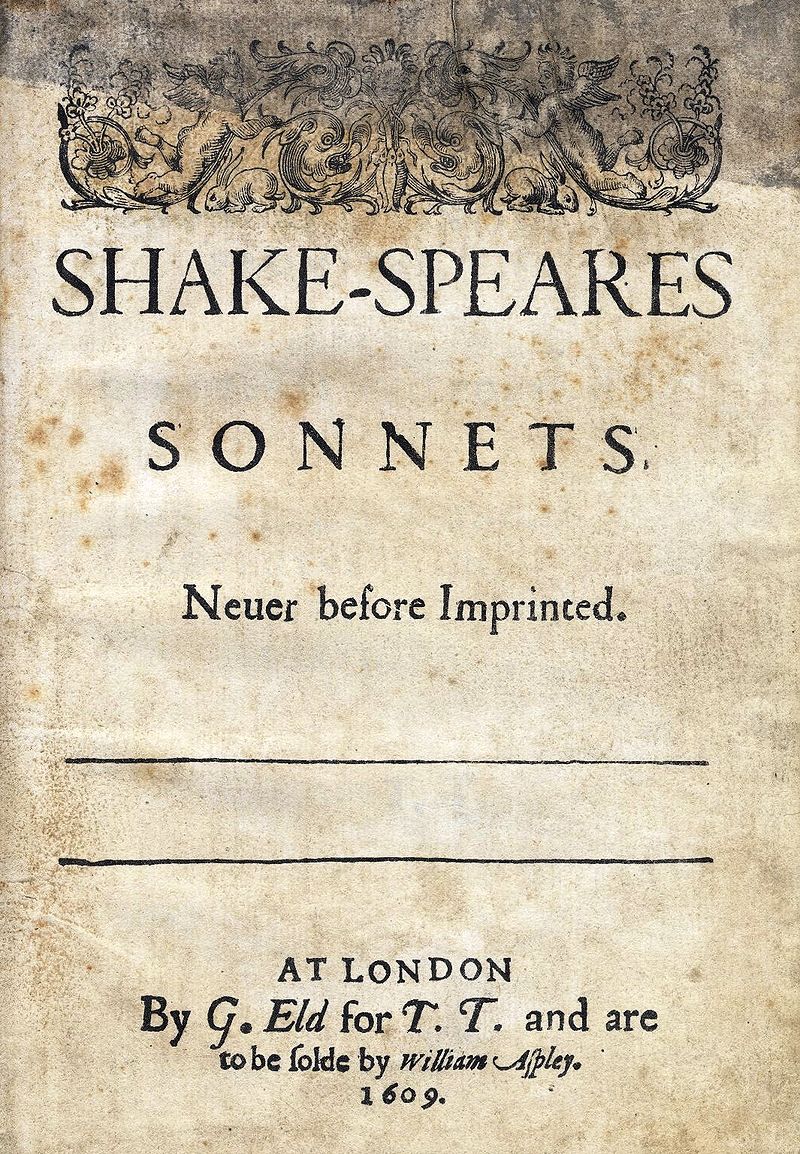 Perhaps the better known form of the sonnet in English literature is theÂ Shakespearean sonnet.Â We call it ShakespeareanÂ because it was the form of sonnet used and popularized by Shakespeare himself in more than 100 of his own sonnets. At times, people also call this type of sonnet anÂ English sonnet.

The rhyme scheme and structure of a Shakespearean sonnet is quite different, being split into threeÂ quatrainsÂ and aÂ couplet. Each quatrain tends to have different rhymes and the last two lines are usually a rhyming couplet. This structure lends itself more to an accelerating progression through different aspects of the topic the sonnet treats.Â Often, at the beginning of the third quatrain the poet shifts the direction of their thought, this is known as theÂ voltaÂ (“turn”). This mood shift can often lead to a pithy, witty or otherwise surprising final couplet. This standard rhyme scheme is represented as ABAB CDCD EFEF GG.

For an example, see Shakespeare’s very well-known Sonnet 130, where his humorous of his mistress starts to change to an expression of his deep love in the third quatrain.

My mistress’ eyes are nothing like the sun;
Coral is far more red than her lips’ red;
If snow be white, why then her breasts are dun;
If hairs be wires, black wires grow on her head.
I have seen roses damasked, red and white,
But no such roses see I in her cheeks;
And in some perfumes is there more delight
Than in the breath that from my mistress reeks.
I love to hear her speak, yet well I know
That music hath a far more pleasing sound;
I grant I never saw a goddess go;
My mistress when she walks treads on the ground.
And yet, by heaven, I think my love as rare
As any she belied with false compare.

Once you get used to the rhyme scheme and metrical pattern, creating your own sonnet can be surprisingly easily. If you don’t place too much emphasis on worrying about the quality of your work, you might be surprised how much fun writing a quick sonnet can be! For example, here is a sonnet following the Shakespearean rhyming scheme I composed in a few minutes.

A girl was seen all silver in her bed

Accompanied by spirits all unseen

A wreath of holly wrapped around her head

Resplendent in their red and mottled green.

How long she lay there sleeping was unclear-

Some say she’d been there since the world began,

But all must know what treasure she held dear

It is not known if she yet slumbers still

Or wakens readying for bitter war.

If crying, she gets ready for the kill,

Or dying, fades from this world evermore.

Prepares to either end, or end her strife.

And one with a Petrarchan rhyme scheme:

I do not wish to suffer this for long

But I don’t know the causes of this spell

That cripples me yet turns my screams to song.

Many have written much and spoken more

On subjects I cannot discuss at length,

Yet I endeavor to conjure my strength

And find out who this torture’s really for.

And now I know I never can explain

The reason I need to enjoy this pain

A self-inflicted wound I can’t refrain

From executing, ’til within my grasp

I know, without my soul, what will remain.

Why don’t you have a go at writing some sonnets of your own to break out of a period of writer’s block? Get your creative juices flowing! Feel free to play with the form, the rhythm or rhyme scheme if you feel like it will make it easier or more enjoyable.

Why not write a sonnet on the classic subject of love? Or perhaps go for a more humorous slant and write about your breakfast.

Try finishing this sonnet which may or may not be an ode to toast:

My lover waits downstairs upon the plate

Resplendent in her golden brownish hues…

Get in Touch with Bubok

If you have a book you want publishedÂ register with us to publish for free.Â Remember that with Bubok you can access all the tools you need to get your project going. Don’t hesitate to contact us to speak with one of our publishing advisors.