Get writing: the Limerick - Resources for writers - Bubok blog ã Print online
This website, whose manager is Bubok Publishing, s.l., uses cookies (small data files that get stored in your browser), your own data and third parties' data as well, for the operation of the site (necessary), analytics (anonymous analysis of your activity on the website) and social media activity (so that you can interact through them). You can read our polûÙtica de cookies. You can accept, reject, manage or view more information about said cookies by clicking on the corresponding button.
AcceptRejectSettings and further information
Bubok blog ã Print online ô£ General ô£ Resources for writers ô£ Resources for writers ô£ Tips ô£ Get writing: the Limerick

In this article, we will explore the history and form of the limerick, offer examples, and suggest writing prompts for creating your own limericks. Hopefully this may help those feeling a lack of creative inspiration to rediscover the joy of writing. Working in a different format can let your creativity run wild, helping you to feel reinvigorated, and maybe even finish that book you’ve been procrastinating on!

This is the first article in a series exploring various examples of short form writing. Short form writing, particularly ones with rigid structural and formulaic restraints often function as fun and useful exercises to escape writer’s block or reading fatigue. The reader knows what to expect and the author has a secure foundation within which to work, freeing up their energy to focus on theme and content. 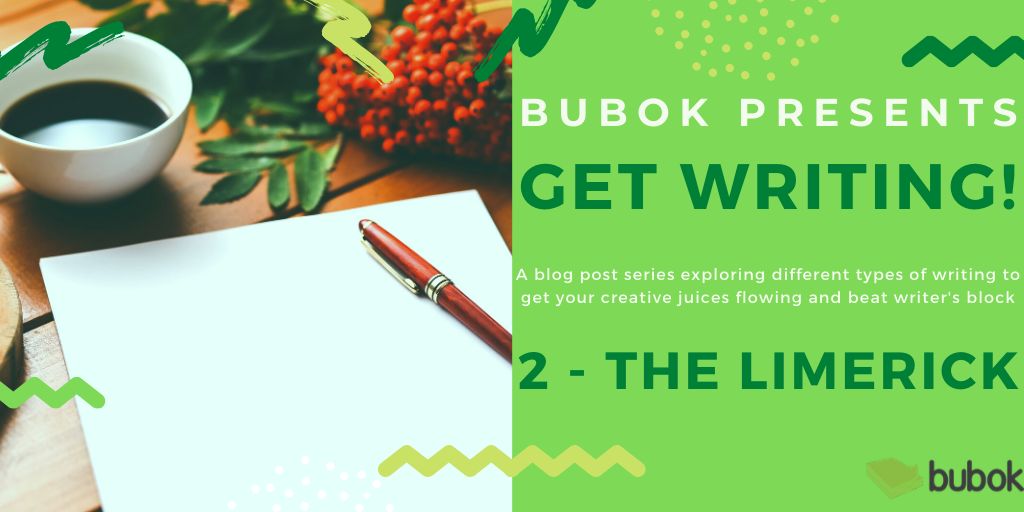 What is a Limerick?

A limerick is a very short poem with only five lines and a strict AABBA rhyme scheme and a predominantly anapestic meter that is usually humorous and quite crude. Working within a strict structure, and a limited length can offer great opportunity for creativity without too much time spent on each work. Furthermore, writing within a strict formula can be a great exercise to overcome writer’s block and force yourself to write by working with a different structure than you’re familiar with.

The History of the Limerick

The limerick is a particularly Anglophone, and relatively modern form of short poem. It only appeared in the early 18th Century. Edward Lear, a 19th Century English author, poet, artist and all-around creative, is known for popularizing them further via his extensive use of the form. His other literary works consisted in large part of nonsensical verse and prose, known for neologisms. Perhaps his most famous work isô The Owl and the Pû¿ssy-Cat.ô Similarly, his limericks tend toward the nonsensical rather than the bawdy tone with which they are now primarily associated. In this case, the humor arises more from the lack of sense, or a subversion of expectation rather than explicit content.

Consider this limerick of Lear’s, formatted in four lines rather than five, that lacks a true punch line:

There was an Old Man ofô AûÇsta
Who possessed a large Cow, but he lost her;
But they said, “Don’t you see she has run up a tree,
You invidious Old Man of AûÇsta?

The name Limerick is presumably a reference to the city or county of the same name in Ireland. The reason why the nameô Limerick has become associated with this form of poetry is unclear, but could have arisen from an association with an earlier nonsense verse form that had a refrain “Won’t you come to Limerick”, which seemingly had an accompanying tune.

Nowadays the limerick is often associated with crude jokes, especially with a reveal in the last line providing a raunchy punch line.

An anapest is a metrical foot that consists of two unstressed syllables followed by one stressed beat. Consider the line below in anapestic tetrameter (four anapests per line), where the underlined syllables are stressed.

By the notation AABBA to denote the rhyming scheme of a typical limerick, we mean that the last word of the first, second and last lines should rhyme, and the 4th and 5th lines should rhyme with each other (usually with a different rhyme from the other lines).

The meter of limericks isn’t always held to the strictest standards, and indeed, the rules of rhyme of rhythm are often broken for comic effect via the failure to meet expectations.

There was a young man from Japan
Whose limericks never would scan.
And when they asked why,
He said “I do try!
But when I get to the last line I try to fit in as many words as I can.

Or this example that deliberately avoids rhyme, attribured to W.S. Gilbert:

There was a young girl from Uganda

Who one day befriended a Panda

An old man walked into a bar

He had a most terrible scar

When writing a limerick you should

Ensure that the end result is good

In order to make sure that’s so

Get in Touch with Bubok

If you have a book you want publishedô register with us to publish for free.ô Remember that with Bubok you can access all the tools you need to get your project going. Don’t hesitate to contact us to speak with one of our publishing advisors.