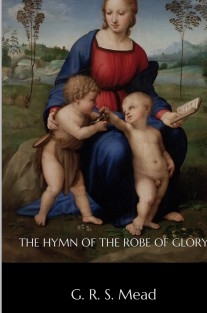 The Himn of The Robe of Glory

The original title of this beautiful Gnostic Poem has been lost, and it is now generally referred to as The Hymn of the Soul. Preuschen, however, calls it The Song of Deliverance (Das Lied von der Erlosung); while in my Fragments (1900) I ventured to name it The Hymn of the Robe of Glory. I here, also, prefer to retain this title, as it seems the more appropriate.The original text of the Poem is in Old Syriac, in lines of twelve syllables with a casura, and so in couplets, for the most part of six syllables. The Hymn itself is a truly poetic inspiration, and deals with far higher mysteries and experiences. The hymn tells the story of a boy, "the son of the king of kings", who is sent to Egypt to retrieve a pearl from a serpent. During the quest, he is seduced by Egyptians and forgets his origin and his family. However, a letter is sent from the king of kings to remind him of his past. When the boy receives the letter, he remembers his mission, retrieves the pearl and returns. But before we can venture to suggest an interpretation, the reader must be made acquainted with the Poem itself in a version based on a minute comparison of all the existing translations.Whatever may be its precise interpretation--and the Mystic at any rate knows that in vital things there cannot possibly be one formal interpretation only--there will be few who will not admit that this ancient Poem of the Gnosis is beautiful. For ourselves, we end with the hope that, when it is better known, no few may find it inspiring and illuminating also.G.R.S. MeadECHOES FROM THE GNOSISUnder this general title is now being published a series of small volumes, drawn from, or based upon, the mystic, theosophic and gnostic writings of the ancients, so as to make more easily audible for the ever-widening circle of those who love such things, some echoes of the mystic experiences and initiatory lore of their spiritual ancestry. There are many who love the life of the spirit, and who long for the light of gnostic illumination, but who are not sufficiently equipped to study the writings of the ancients at first hand, or to follow un aided the labours of scholars. These little volumes are therefore intended to serve as introduction to the study of the more difficult literature of the subject ; and it is hoped that at the same time they may become for some, who have as yet not even heard of the Gnosis, stepping-stones to higher things.

The Symbolism of the Tarot

Although represented as a pack of cards, the Tarot really is something quite different. It can be "read" in a variety of ways. As one [...] See book

When Nothing Is Impossible.
Impossible is nothing. With that as his motto, Spanish surgeon Diego GonzÃ¡lez Rivas takes up his fight against cancer and pain. Using his [...] See book
12 books bought
from POLAND