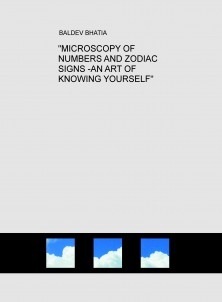 "MICROSCOPY OF NUMBERS AND ZODIAC SIGNS -AN ART OF KNOWING YOURSELF"

With the practical application of the primary laws of mathematics to the material existence of a native. This science deals with the nine major planets Â Sun, Moon, Jupiter, Uranus, Mercury, Venus, Neptune, Saturn and Mars with their characteristic features. Each one of these nine planets is associated and assigned to a number ranging from 1 to 9, depending on which planet carries the tendency to vibrate to a certain number.

These nine planets, with each different number influence the human life in an important and substantial way. The planetary positions at the time of a personÂs birth ascertain the personality of that individual in correspondence to their prime number. A primary and a secondary planet governing each individual at the time of birth respond to their own number or their birth number.

Numerology on the other is often used as a useful tool to decide our important decisions as when to invest, marry, travel, change jobs, and when to relocate or when to change our residence and premises. How does numerology work is still a mysterious question. Is it an occult study, or  Is it a cosmic force Do numbers have vibrations effects or is it a GodÂs gift to humanity is still to be discovered in depth. Therefore an attempt has been made to make this cosmic science of number simplify in a easy manner for beginners.

The essential guide to contemporary mediation is written by two of the leading UK mediators in a clear and accessible style, but with the [...] See book