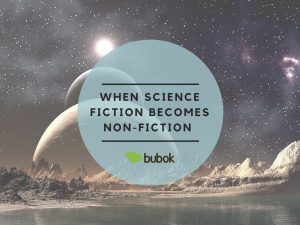 There is an undeniable co-dependency between science and science fiction. Many science fiction writers are also scientists themselves, and scientists often gain inspiration from works in the genre. Either way, it becomes something of a “chicken versus egg” scenario, where it’s not always clear whether the literature influences the science, or vice versa.

The director of research and development at Motorola, Martin Cooper admitted that the communicator in Star Trek became the company’s ŌĆśobjectiveŌĆÖ in terms of a design for the first mobile phone which was released in the early 1970s.

After reading H.G WellsŌĆÖ 1914 novel The World Set Free in 1933, Physicist Leo Szilard was inspired to solve the problem of creating a nuclear chain reaction. The book imagines the emergence of atomic energy followed by a tragic world war and the eventual emergence of a peaceful global government. Similarly, H.G WellsŌĆÖ novel inspired Szilard to campaign for arms control and the peaceful, international use of nuclear power after World War II.

Jules VerneŌĆÖs 1870 Twenty Thousand Leagues Under the Sea, was the inspiration for American inventor, Simon Lake to create the modern submarine. His company successfully created the ArgonautŌĆöthe first submarine to operate in the open ocean, in 1898.

The French author Jules Verne similarly influenced others to invent new technology with his literature. For instance, in VerneŌĆÖs book Clipper of the Clouds,┬Āhe envisioned a future of air travel. This inspired Igor Sikorsky as a boy, who later went on to invent the first successful helicopter.

Another example is the invention of the first liquid-fueled rocket, launched into space on the 16h of March 1926, initially inspired by H.G. WellsŌĆÖ┬Ā novel, War of the Worlds.┬ĀRobert┬Ā H. Goddard, the inventor, became interested in space flight after reading the story in a newspaper. He later recalled that┬Āthe idea of interplanetary flight ŌĆ£gripped my imagination tremendously.ŌĆØ.

Other possibilities of Sci-Fi

As well as influencing Science and the progression of technology, science fiction can serve other positive purpose. Indeed, dystopian fiction can work as a self-defeating prophecy, helping us to recognize and prevent certain unwanted possible futures. They can function as a how-to-not manual, presenting a world which we could end up living in.

To read more about how Science Fiction has the potential to improve our future, follow this link.

To try your hand at writing a Science Fiction novel, and see how real your ideas become, click here.